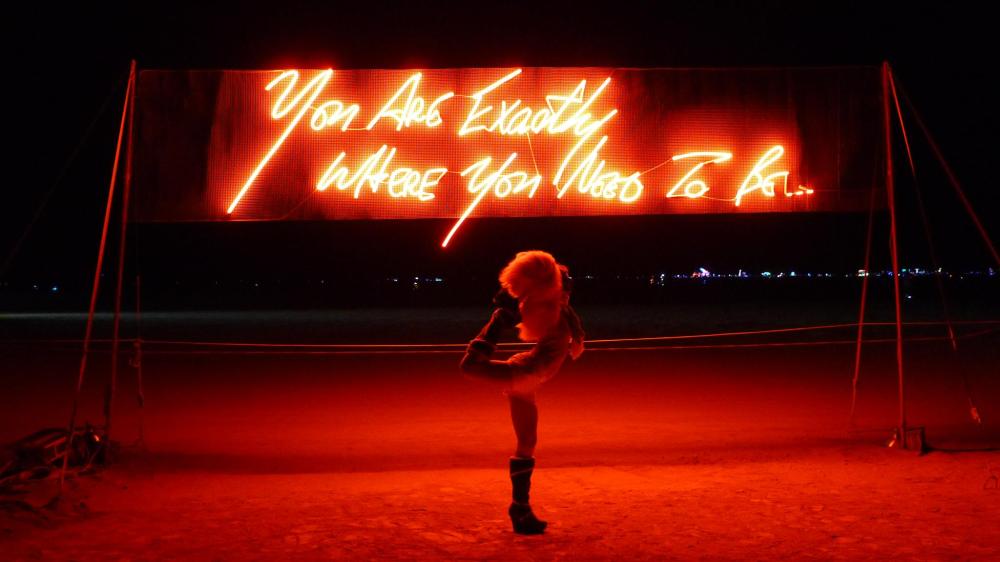 I dreamt about Burning Man last night. I was relaxing at a camp, surrounded by people I had just met, but whom I felt I had known for lifetimes. My favorite thing about Burning Man is the deep connections it fosters. People have been asking me to describe my experience, and all I can say is that it was like living an entire lifetime in one week. 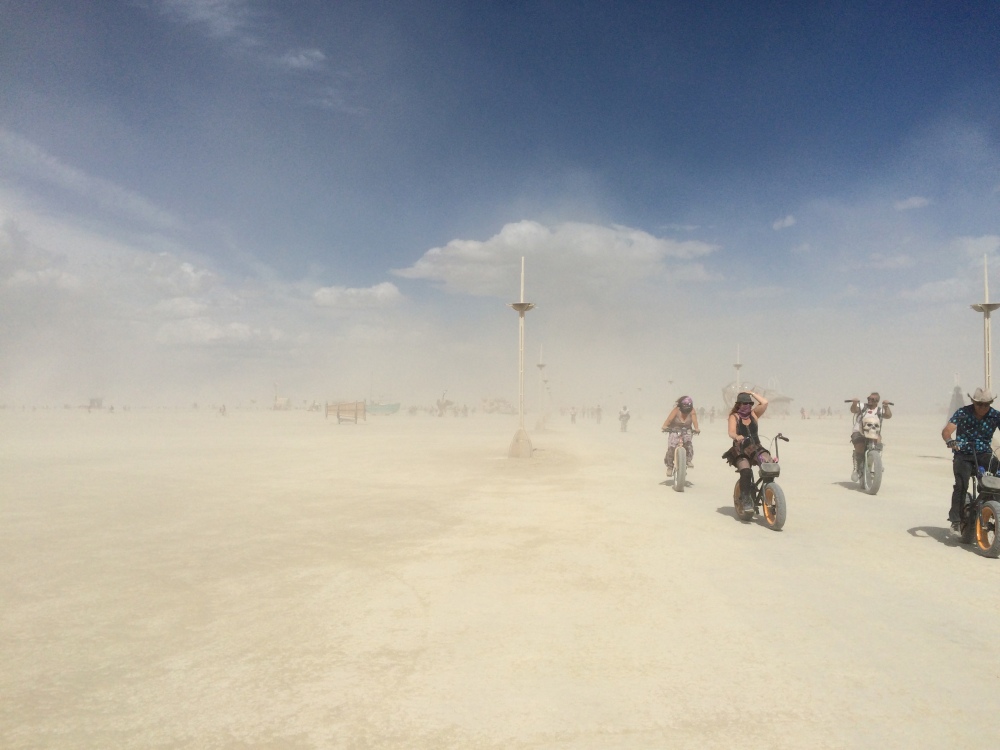 One of the many dust storms that rolled through Black Rock City.

Especially since this was my first time at Burning Man, I feel like I entered as a child—innocent, ignorant, curious, open—and left as a new person—experienced, a little wiser, still curious, and wanting more. Burning Man certainly does not make you more adult-like. If anything, you become more childlike. The Playa encourages playfulness, curiosity, open-mindedness, spontaneity and joy. 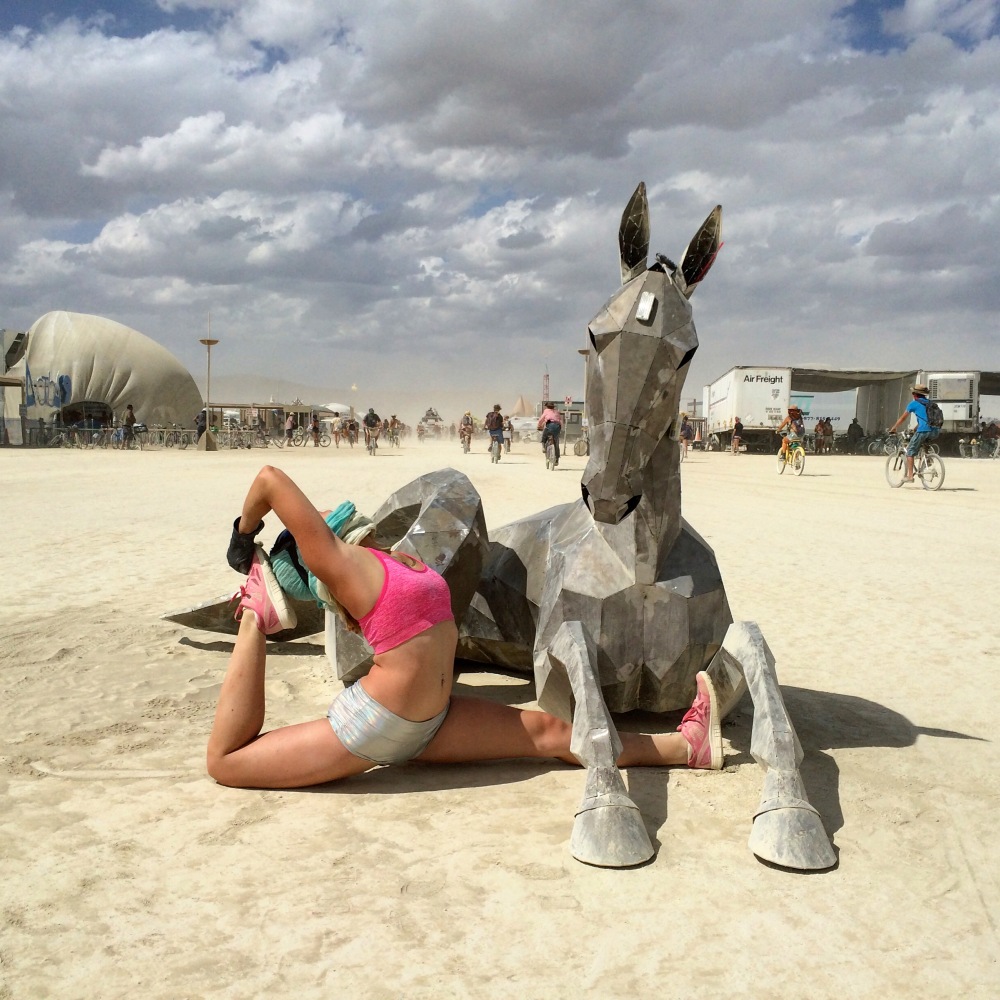 Of course I found the only horse at Burning Man.

The artwork was moving, thought-provoking, and sometimes interactive. You can’t go to Burning Man and just observe. To get the most out of it, you must participate and engage. The art cars were creative, funny, beautiful, and musical. The dust was not as bad as I thought it would be, even though it seems this was one of the dustiest years in quite some time. The theme camps were diverse. There’s something for everyone. I especially enjoyed an aerial camp that happened to be right across from Distrikt, so after taking flight on the rings, I shook my booty over to the music and got lost in the many sick beats. 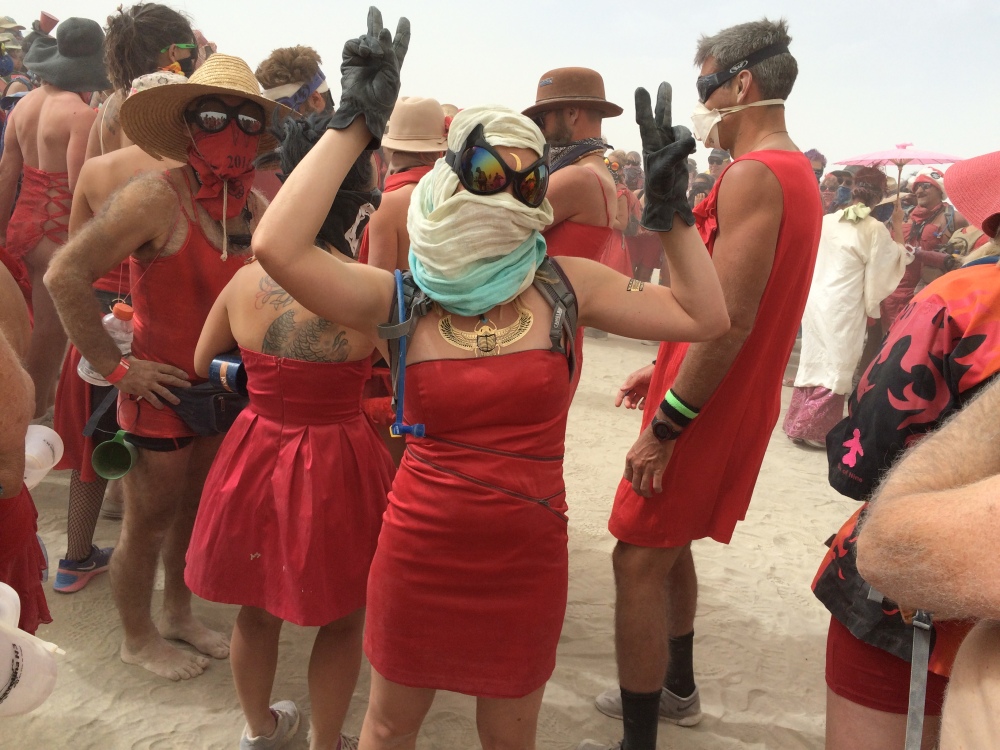 There was a dust storm during the Black Rock City Hash House Harriers Red Dress Run. We still managed to find trail. On-on!

I tried acroyoga (loved it, of course), drank a margarita at the end of the world, stopped by a bad advice booth, stargazed, watched the sunrise, went to the movie theater, rested on mushroom benches, hopped and danced on colorful LED lily pads, felt awe during the Man burn, released grief at the Temple, became entranced in the primal energy at the Thunderdome, then found myself utterly spellbound by the Serpent Mother. 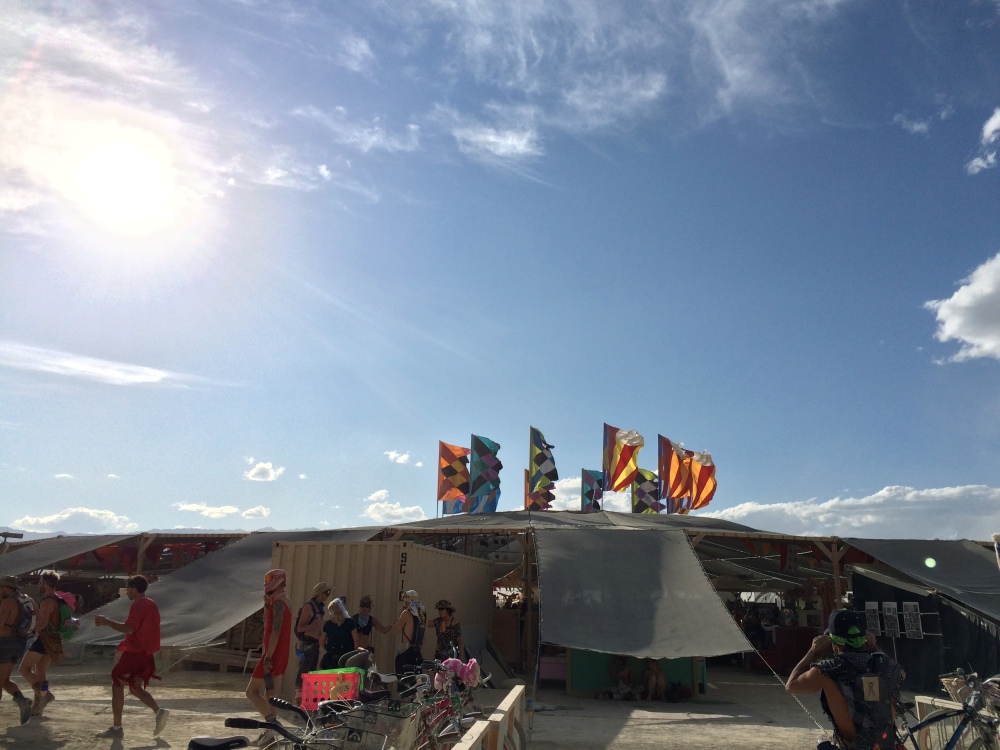 Center Camp always had something fun going on, from live music, to acroyoga, to spoken word poetry, and more.

What I didn’t do was take many photos or videos. I wanted to be wholly present in every moment, so I found myself taking out my camera a lot less than I thought I would, and I’m okay with that. Immediacy is palpable on the Playa. It’s now or never. You can’t do it all at Burning Man—there’s artwork, events, camps and more that I missed—but all you can do is allow yourself to be drawn to whatever speaks to your soul while you’re on the Playa. Going with the flow is so important. I’m grateful for everything I experienced at Burning Man and I absolutely plan to return. 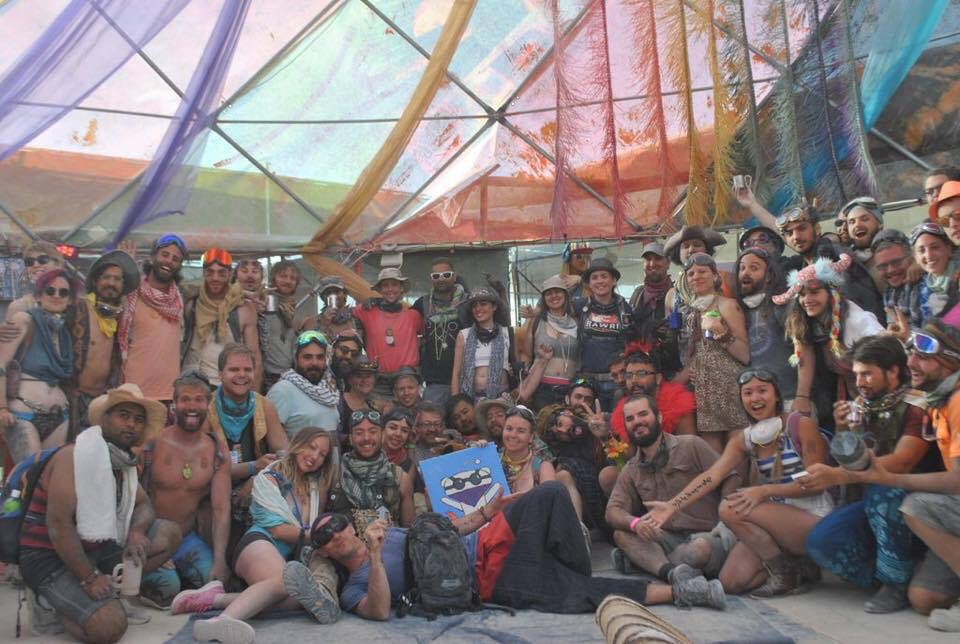 Not my photo, but I am in it. I went to the Reddit meetup and had a blast.

As you enter, the greeters say, “Welcome home!” I think one reason Burning Man feels like home to so many people is because radical self-expression is encouraged, so you can be the most authentic, weird, quirky version of yourself and, as long as you’re not harming anyone, you’ll be accepted, because radical inclusion is definitely a thing in Black Rock City. If you’re interested in reading more about what makes Burning Man such a loving, open place, I recommend starting here. 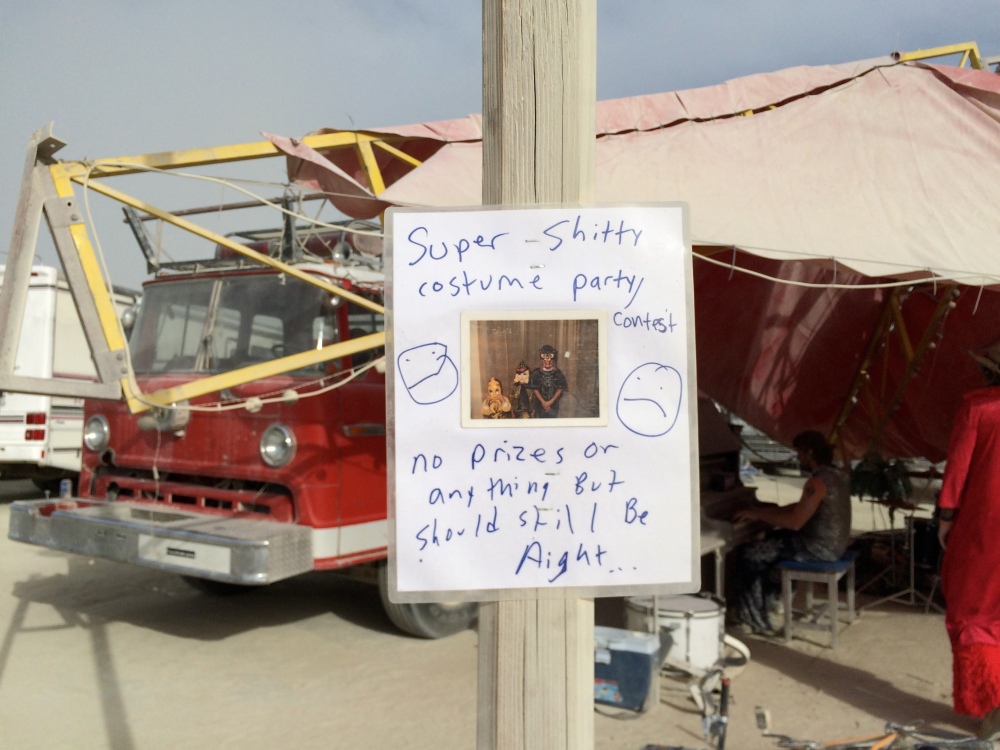 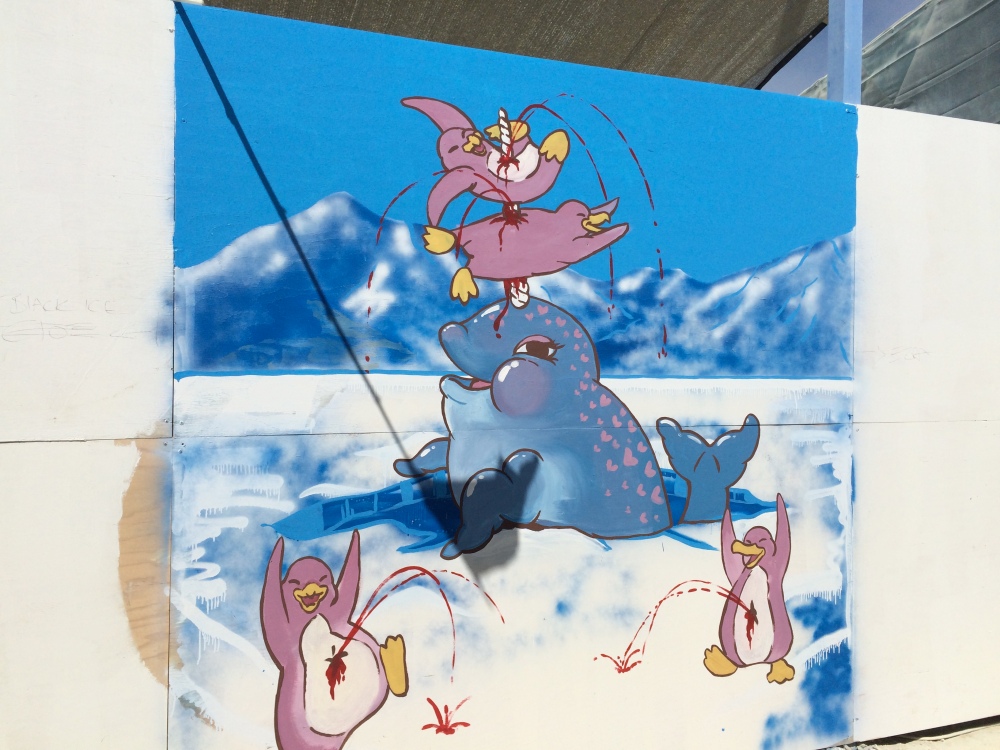 But so did love, healing, joy, and acceptance. Burning Man tested my limits on many levels, and I left a stronger person because of it. I left more open, accepting, curious, and loving. The difficult task is holding onto all the goodness created and shared at Burning Man. How can you cultivate that same love in the default world? I’ve learned it comes from within. Love and accept yourself, and that love and acceptance will naturally extend to others. Burning Man is so much more than a music, art, or yoga festival. It truly is another world where outward exploration leads to inward discoveries. Oh, and one last thing—burners definitely give the best hugs. 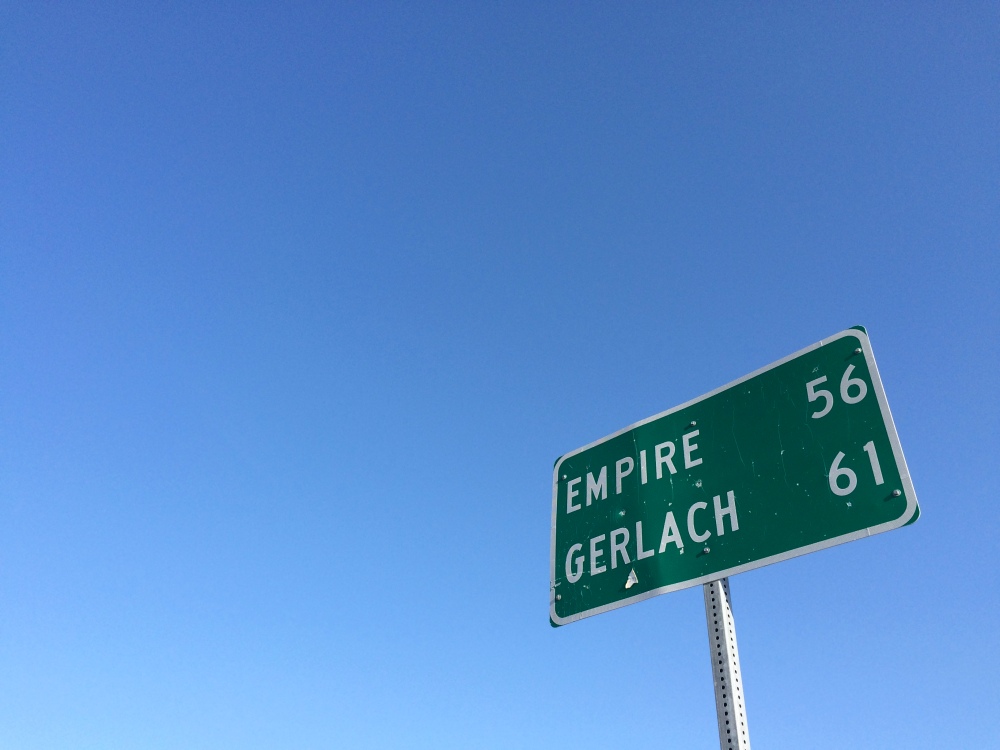 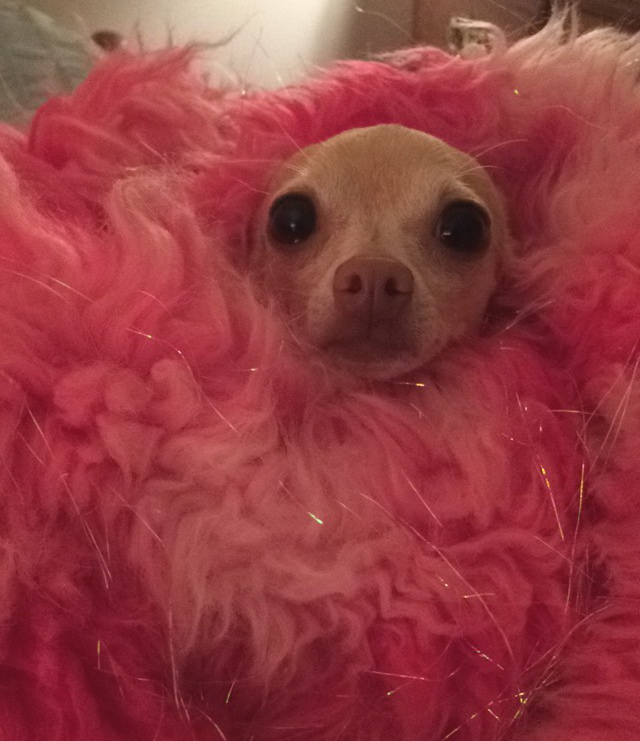 When I got home, I just wanted to curl up in my pink furry jacket and sleep until Burning Man 2016. Unfortunately, that’s not an option.